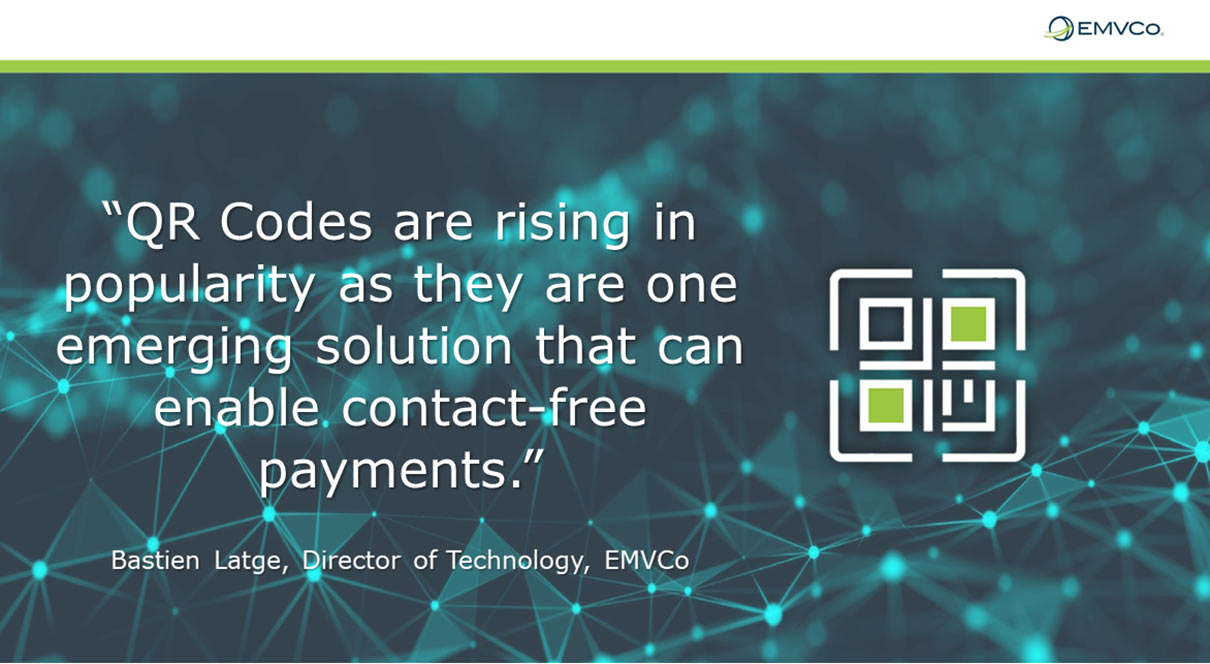 Posted on 13 May 2021 by Bastien Latge in Educational Resources

Advances in technology are making secure card payments possible in new ways – whether online or face-to-face.

EMV® Specifications have evolved beyond the original EMV Chip Specification to support a wide range of technologies for card-based payments, including contactless, mobile, tokenisation and QR Codes™.

Increasingly, QR Codes are used to initiate mobile payments at the point-of-sale. They are rising in popularity as they are one emerging solution that can enable contact-free payments.

QR – or Quick Response – Codes are ISO 18004-compliant encoding and visualisations of data. They are essentially two-dimensional machine-readable barcodes. QR Codes™ store data – such as a web address – using black and white squares which can be “read” by smartphones or other barcode readers.

Scanning one of these barcodes with a smartphone camera or barcode reader connects the scanning device to the information stored within the code.

The EMV QR Code MPM Specification can enable account-based payment as well as card-based payment. This increases the interoperability, efficiency and flexibility of QR Code deployments based upon the EMV Specification. It also increases choice and participation for all parties and can work in any marketplace in this way.

Most importantly, for merchants this means that it simply provides one QR Code for all the payment providers they accept and avoids the need to show multiple QR Codes in their store.

This acceptance provides a wider and more inclusive, consistent experience for both merchants and consumers. The EMV® QR Code MPM specification has been adopted in dozens of countries globally, some of which have adopted it as a national standard, including Singapore and South Africa.

The specific benefits of the EMV specification are:

As a global specification, the EMV QR Code specification can deliver lower deployment and implementation costs through greater efficiencies with vendors, as well as increased flexibility of processing options.

QR Code is a registered trademark of DENSO WAVE INCORPORATED.

The What, Why and How of EMV QR Codes™

Get the latest posts delivered to your email inbox.

Organisations from around the world participate as EMVCo Associates and Subscribers to contribute their knowledge and expertise to the EMV® Specifications. Click here to learn more.

SIGN UP
← Return to EMV® Insights Home
Share this ArticleLike this article? Email it to a friend!
Email sent!